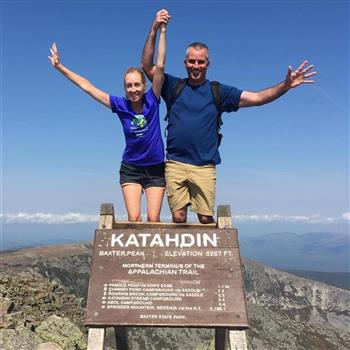 On November 16, 2017, John went for an MRI for unexplained facial numbness that I was convinced was Lyme disease. Life changed with a 5pm phone call from his doctor that evening urging him to go to straight to the ER. Wait, what?? The kids need to get to practice! I'm in the middle of cooking bacon for the football team dinner! Sean's big championship football game is tomorrow night!! WE DON"T HAVE TIME FOR THIS!!

But somehow you do have time for this. At the ER, the first of many caring doctors showed us the tumors in John's brain, and a CAT scan an hour later revealed the cancer was spreading from his lungs. WHAT?? How could John have lung cancer? We had just climbed Mt. Katahdin 2 months ago?? He has never smoked!! Of all the things I have worried about in my life, John getting lung cancer was not one of them.

But cancer doesn't discriminate. And just like that, we were putting one foot in front of the other, and John's often annoyingly optimistic attitude was shining brightly and filling us all with hope. And the tsunami of support from our community filled us with love. And the wonderful doctors at the New England Cancer Center confidently showed us a path forward and the many new treatment options that weren't reflected in past survival statistics. But the biggest cancer blessing wouldn't come for another month, when a liquid (blood) biopsy revealed John's cancer was due to a mutation of the ALK gene. I found the ALK Positive facebook group and found support, hope, courage, strength and so much more. Please consider a donation to help fund more research for ALK lung cancer to help people like John continue to live with this disease.