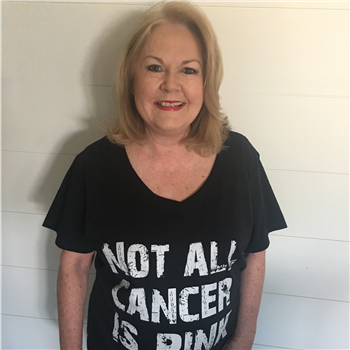 In 2017 an incidental finding of a 9mm tumor was found in my lung. Genetic testing diagnosed me with a rare type of lung cancer marked by the genetic mutation called ALK. ALK+ is found in about 4% of lung cancers, particularly in nonsmokers and younger people. Targeted therapy treatments enable ALK patients to beat the two year life expectancy, but the fight is far from over against ALK positive cancer.

The duration of my life is entirely dependent on the development of new treatments against the indefinite evolution of the cancer against the current arsenal of therapies. Unfortunately, after a period of time these targeted small-molecule tyrosine kinase inhibitors stop working or the cancer builds up a resistance. ALK patients are now raising money to fund research specific to our treatments and we are eager to speed up the research for new treatments!

November is Lung Cancer Awareness Month and I need your help.
Please join me in my efforts to help ALK patients influence the direction of research, advocacy, and awareness that will, one day, save their lives. I appreciate your support.

3. RLReed Lambert
Thanks for raising awareness! love you