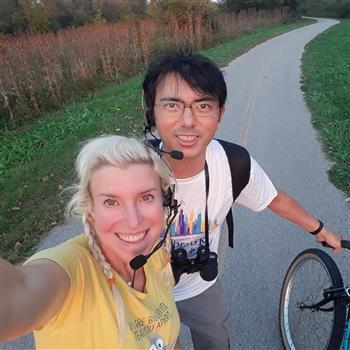 In August 2018, on the weekend of our first wedding anniversary, Lou was diagnosed with stage-4 lung cancer. He has never smoked, and our favorite things to do together have always been hiking, biking, and running - anything that brings us closer to nature. He was 49 at the time. Like 8% of all lung cancer patients, Lou's cancer was caused not by any environmental or lifestyle factors --but by an acquired genetic mutation.

Because it's younger people that tend to get genetically driven cancers, they're rarely diagnosed until they are late stage. All lung cancer patients are face a disease that kills more people than all other cancers put together.

Fortunately, ALK and similar mutation driven cancers are actually breaking ground in how many cancers are treated, and moving beyond chemo, radiation, & surgery, with targeted therapies (targeting just the mutation).

The potential is great, and we know that in time, ALK+ and other genetically driven cancers will be chronic ailments. But WE ARE NOT THERE YET, and for patients like Lou, time is the difference between life and death.

New treatments need to be developed, because WHEN ONE MEDICATION STOPS WORKING, WE HAVE TO HAVE ANOTHER ONE to which the cancer is not yet sensitized. The more we have, the longer patients can live.

So, I'm raising money to accelerate the development of new treatments for ALK+ lung cancer—and I need your help!

ALK Positive, an organization of amazing and highly motivated people with ALK-positive lung cancer, is raising funds this month for research awards that will be selected BY OUR COMMUNITY OF ALK+ PATIENTS, for development of new therapies for ALK+ lung cancer. (Based on last year's fundraising, we're already funding three exciting studies, including one of a potential vaccine!).

Please join me in my efforts to help ALK patients influence the direction of research, advocacy, and awareness that will, one day, save their lives-maybe even Lou's.

4. BPBeth Phillips
Miracles can and do happen every day. Here's to many more years of miracles.
5. JSJennifer Schiess
Love you, B and Lou!