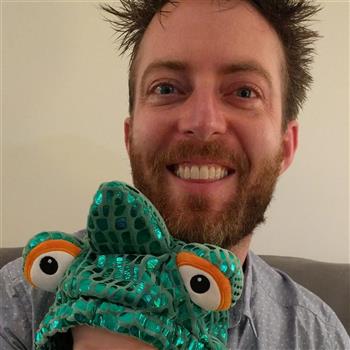 Update (November 2020): Thank you to everyone who donated over the past year! Together, we reached the $10k goal. I have created a new campaign for this year's Lung Cancer Awareness Month, available at: https://lungevity.donordrive.com/index.cfm?fuseaction=donorDrive.personalCampaign&participantID=63509

I learned on November 15, 2019 that I have ALK-positive adenocarcinoma, after several weeks of waiting on my cancer’s biomarker test results. This mutation, found in about 4% of non-small-cell lung cancer cases, affects mostly nonsmokers and disproportionally affects young people (those under 50).

The most effective form of treatment for ALK-positive cancer is a targeted therapy, a pill which fights it by disabling a specific chemical pathway that is unique to the cancer cells. Identifying which pathway is relevant requires detailed genomic testing of a person’s cancer, which is now widely recommended as part of the movement toward “personalized medicine.” The success of targeted therapies for ALK-positive patients has increased the median duration of survival following diagnosis to almost seven years, which is much better than one year (as would be expected on chemotherapy). However, in each person the cancer eventually mutates and forms resistance to all existing targeted therapies.

Seven years — the expected (but in no way guaranteed) duration of the remainder of my life under current technology — is actually a long time as far as scientific progress goes. Just seven years prior to my diagnosis, in 2012, there were no FDA-approved therapies for my condition. (Some were in clinical trials, and five now have FDA approval.) Seven years prior to that, in 2005, the ALK mutation had not even been identified in the context of lung cancer, and there were no targeted therapies for any type of lung cancer. (Now there are approximately 30 such therapies.)

We are at the verge of turning what was once a terminal illness into a manageable, chronic condition, like diabetes.

Indeed, as I learned during my first visit to the Johns Hopkins Hospital, we are living in a renaissance of cancer treatment options. There is no shortage of good ideas — the main limitation is the resources needed to systematically investigate the best of them. And while pharmaceutical companies will often invest in an idea that has already shown promise, they are less interested in investing in early-stage research. As a scientist, I am a big believer in the power of this type of research.

But there are significant challenges in raising money for lung cancer research. Despite its high lethality, it receives a much lower fraction of government funding per death than other types of cancer because of the stigma associated with being primarily a “smoker’s disease.” I believe this neglect is unfair to everyone, as 1 in 16 people will be diagnosed with lung cancer in their lifetime. In the case of ALK-positive patients, this assumption does not even hold, as there is no correlation with smoking. As I have learned, anyone with lungs can get lung cancer.

In 2018, the projects funded by ALK Positive supported the investigation of immunotherapies, which have shown great promise in treating other forms of lung cancer but have so far shown little response in ALK-positive patients. A large portion of 2019’s money will fund an upcoming clinical trial that will study combination therapies with off-label drugs (i.e., those that have already been approved in another context).

These and future ideas are attempts to further improve outcomes for ALK-positive patients (like myself) now and in the future. And although ALK-positive cancer may sound like a relatively rare disease, it will affect about 1 in 470 people at some point, meaning that while my situation may be the first you’ve heard of this mutation, it probably won’t be the last time that it affects a friend, family member, or colleague.

Please consider making a donation. If you prefer to write a check, please make it payable to “ALK Positive/GO2 Research Fund,” write “ALK Positive Research - Jim Garrison” on the memo line, and mail to:

Your support means a great deal to me. Thank you for your time, well wishes, and consideration.

2. PPaul and Mary Jo Hughes
Thinking of you and your family.

3. SWSarah And Cliff Waldman
Jim, please know that you continue to be in our thoughts and prayers. Take care and God bless. Sarah and Cliff

5. MGMisha Garrison
So much hope thanks to the recent Summit!!

11. SCSu-Kuan Chu
Eat healthy and exercise regularly! Stay strong and relax! Trust yourself and be yourself! You are your own definition of your life!
12. SCSu-Kuan Chu

14. AAni
Jim, in addition to being an absolutely bad-ass physicist, has inspired me to face my challenges to the best of my ability. I am rooting for him, and if you're reading this, I urge you to do the same!

19. AEAdam Ehrenberg
Stay strong, Jim. Thinking of you during this time.

23. ?Anonymous
Good luck, my thoughts are with you!

24. PNPradeep Niroula
All the best, Jim.

26. TGTeresa Garrison
I have always looked up to the smart, silly, and strong brother you are. I am so lucky to have you in my life. Happy Birthday! Love, Teresa

29. AAbhinav
Best wishes Jim, my thoughts are with you and your family.

31. WFWendy And Matthew Fisher
Dear Jim and Misha, We are cheering for you both. Much love to you both and Naomi, Wendy and Matthew
32. EBEmma Beck

35. OPOlga & Przemek
We know you can beat this. Stay strong!

37. ILIsabella Lores-Chavez
Jim, you’ve got so many people ready to support you! I hope you guys will continue to feel loved and cared for as you keep striving to get well. Sending you three all my love.

43. MAMonica And Nick Abeles
Jim, your positive attitude is an inspiration for all. May 2020 bring you and your entire family great news for a breakthrough in your treatment. And may you live a happy long life with your dear ones!

45. MFMolly Freed
Sending you so much love, Misha and Jim! Wishing you a new year of research breakthroughs and health.

48. ASAndy & Merle Steiker
Our thoughts are with you and Jim and we are sending positive vibes your way as Jim begins his battle!

53. SKSteven Karbelnig
I’m impressed by your courage to fight this and your thoughtfulness in bringing awareness to this desease. I love you guys and have you in my thoughts always. ❤️

54. SGShannon Graving
So sorry for the reason but happy to contribute to fight this horrible disease. I had no idea that lung cancer research is underfunded.
55. ?Anonymous

57. AKAlan Karbelnig
Always in our thoughts, Jim. The fight is on and we r betting on more treatment breakthroughs.

58. LDLinda D.
Thinking of you and your family. May all of the good ideas in this research mature into good treatments.

59. DADaniella A.
Hope more research can be done to treat this lung cancer. Sending love to you all.

60. NKNatalie Karbelnig
Sending love to you Jim, and the entire Garrison fam.

61. MGMisha Garrison
I'm constantly amazed by how you're handling your diagnosis. Good days and bad, I'm optimistic about our ablity to face this together and with the love and support of our families and friends. Let's research the hell out of this thing! 💖